After 5 games at this ICC World Twenty20, here's how Australia's stats stack up...


Posted by Imran 1 comments
Email ThisBlogThis!Share to TwitterShare to FacebookShare to Pinterest

He started 2011 in uncharacteristic fashion, accumulating more runs (12) than wickets (9) in two Tests against Pakistan in January.  However, the long break before his next Test clearly did him a world of good.  He now seems fully refocused on keeping up his amazing wickets/runs ratio.  In his three Tests since November, he's picked up 10 wickets thus far, with potentially more to come in the second innings at Hobart. In that time his scores with the bat have been 0, 1, 0 and a golden-clean-bowled 0.  You gotta love him!

Posted by Imran 0 comments
Email ThisBlogThis!Share to TwitterShare to FacebookShare to Pinterest

If I were selecting an all-time ODI XI, I wouldn't hesitate for a second before making my first pick. While the sheer weight of Sachin Tendulkar's achievements coupled with India's obsession with ODIs will probably mean that the Little Master goes down as the most important player in the history of the format, he still wouldn't be that first pick of mine. On the basis of ability on the field of play alone, in any objective analysis of the best ODI batsmen (and let's face it - batsmen win one-dayers), the man who famously said "class is permanent" permanently comes top of the class.  Mr Rajesh over at Cricinfo just produced one such piece of objective analysis, comparing the averages and strike rates of great players across eras. Combine the evidence of that article with a superb record in finals (including two of the World Cup variety) and a knock that's arguably still the greatest ever and the conclusion is clear. Sir Viv is still the King of ODI Cricket.

While Sri Lanka are battling for a draw against Pakistan over in Abu Dhabi today, Murali is battling Lawro. Come on Murali! 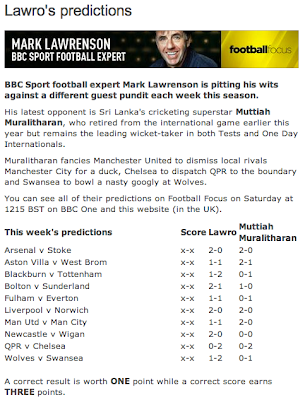 After six months of silence, it's time to get back to blogging. Before any real writing of my own, however, first a bit about some interesting cricket reading. Of articles that have caught my attention of late, the most thought-provoking is a column by Mike Atherton in the Times. Athers gives a fascinating glimpse of the insight England coach Andy Flower has gained by employing a full time statistical analyst (Nathan Leamon), inspired by the methods of the famous baseball coach Billy Beane, of Moneyball fame. If - like me - you're interested in mathematics and financial markets, you'd be excited to learn that Flower (with Leamon's help) uses Monte Carlo simulations to aid his decision-making. Even if you're not a "numbers person," however, you'd probably be intrigued by Leamon's claim that

I'd been meaning to read Moneyball for some time and ordered myself a copy of a few minutes after I first read Athers' article. I may even go see the movie when it's released in the UK next month. The ideas popularised by Michael Lewis' book revolutionised baseball management. Looks like cricket coaching is up next.

Speaking of revolutionary events, apparently Saturday was something of a landmark in the nascent history of "cricketainment," as London's 02 Arena played host to the "Titans of Cricket." According to the Observer's Barney Ronay,

"This travelling spectacular with its "cricket-related tasks" and roster of basking greats (Flintoff! Afridi! Gilchrist! Vincent!) is not cricket at all but is instead cricket-related product, crickertainment, crick-bizz. It is perhaps best seen as a taster for people who find the IPL a bit too grown-up and complex. This is cricket on crack, the Ashes on acid, a moment to just sit back and let them crickertain you."

I don't think I'll be swapping Test tickets to go see the Titans any time soon, but to be honest the event does sound like it would have been fun to watch. Perhaps it might also have cheered me up from my depression at the state of Sri Lankan cricket at the moment. Peter Roebuck is someone whom I criticised pretty fiercely a couple of years ago, but his bravely blunt and depressingly accurate description of Sri Lanka's current predicament has served as a reminder to me of why he's so highly regarded as a cricket columnist.


"[New coach Geoff] Marsh begins his tenure with the last remaining great players near the end of their time and tether. The two best bowlers the country has produced have withdrawn, and the team has not won any of its last nine Tests (though as the new captain correctly points out, it has only been beaten twice in that period). Sri Lanka are not at the top or the bottom, but they do seem to be on the way down. Nor do they have the resources to affect a swift turnaround..."

One issue Roebuck touches on in an aside about Tony Greig is the problem of commentators having "financial interests that may influence their opinions," as Jarrod Kimber (Mr Cricketwithballs) puts it in a Cricinfo piece on the same topic. I wholeheartedly agree with Jrod's plea that we should be told of commentators' "allegiances to players, or boards, when they are discussing them." He highlights the involvement of Roshan Abeysinghe, Ian Botham, Alec Stewart and Michael Vaughan as players' agents/managers, Tony Greig's position as a tourism ambassador for Sri Lanka and Ravi Shastri and Sunil Gavaskar's BCCI contracts.


"The problem is that if we don't know who is getting paid by whom, how can we make an educated decision on whom to trust? Did the batsman miss that brilliant unplayable ball as described by the commentator, or was it, in fact, a career-defining terrible shot? If we know the background, we can at least have a chance of seeing through the subtext, but without that we are just being treated like fools by the very people who have made their money from our subscription fees."

And finally... it appears Nasser Hussain is another commentator with an allegiance to a player, except a player of a slightly different sort - a character in a Bollywood movie. In Patiala House, Akshay Kumar plays a British-born Sikh who goes against his father's wishes to pursue his dream of playing cricket for England. Click below to see how Akshay gets selected (apparently on the basis of one over in the nets), much to Nass' cringetastic delight:

Today's Guardian features a brilliantly hilarious - and astute - column by Barney Ronay, comparing the contrasting allures of the IPL and the County Championship.

"On a commercial level there was only ever going to be one winner here. Mumbai Indians are currently sponsored by Pepsi, Mastercard, Kingfisher, Wrigley's gum and Royal Stag whisky, which taken together really does sound like a particularly taxing night in. This season Yorkshire's sponsors include Bryan's Fish & Seafood Restaurant and Aunt Bessie's Yorkshire Puddings. At the time of writing there is no word of any plans inside Headingley to introduce the Aunt Bessie's Yorkshire Puddings Moment Of Success, or to designate any outbreaks of six-hitting as a Bryan's Fish & Seafood Restaurant Maximum."

IPL time: am I a Tusker or a Super King?

It's that time of year again.  Less than a week to catch one's breath after the World Cup and the IPL is already kicking off.  This time around I find myself with a dilemma over whom to support.  Over the past three seasons, I've become a pretty serious Chennai Super Kings fan.  Despite the major reshuffles elsewhere, CSK have kept the vast majority of their squad together, so it's likely I'll be rooting for them.  However, one of the few players they did lose was Murali, who is now going to be playing in a team captained by fellow Sri Lankan Mahela Jayawardene.  I'll have to wait and see which way my heartstrings tug me when the two sides face off, but in today's opener, there's no question whom I'll be cheering on.  Come on the Super Kings.